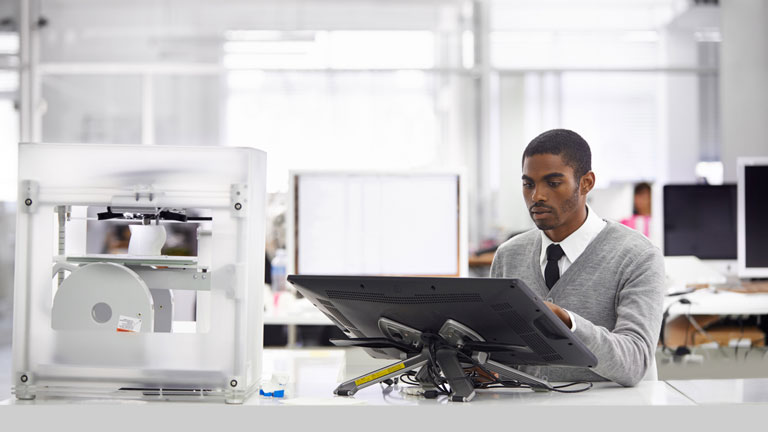 At its core, it’s simply a twist on the classic industry design philosophy called design for manufacturing (DFM), which has been described as the general engineering practice of designing products in such a way that they are easy to manufacture.[1] It’s also been said that DFM focuses on minimizing the complexities involved in manufacturing operations as well as reducing the overall part production cost.[2]

So how does DFAM differ from DFM? Design for additive manufacturing not only looks at the bare-bones function of a part and its classic assembly techniques, but addresses just how to produce it with additive manufacturing equipment and materials.[3] For example, 3D printing introduces an almost entirely different set of constraints on manufacturability compared to traditional manufacturing methods such as injection molding or CNC machining.[4]

Commercializing additive manufacturing in production roles is not just a matter of figuring out how to switch existing parts from subtractive to additive. Rather, it is about redesigning entire objects such as assemblies and subsystems in view of the newfound availability of advanced additive manufacturing. Put another way, it involves redesigning them because their entire earlier design was conceived within the constraints of a world where advanced additive manufacturing did not yet exist. So instead of just modifying an existing part design to allow it to be made additively, full-fledged design for additive manufacturing involves reimagining the overall object so that it has fewer parts or a new set of parts with substantially different boundaries and connections. Many examples of the deep-rooted practical impact of DFAM emerged in the 2010s.[5]

One of the best-known examples is that of GE Aviation, which revealed in 2017 that it had used DFAM to create a helicopter engine out of 16 parts instead of the usual 900 — which demonstrated the potential to greatly reduce the complexity of supply chains.[6] Peter Zelinski, editor-in-chief of Additive Manufacturing, cites a GE Reports article describing the exploration into the potential of additive manufacturing that occurred immediately after GE Aviation acquired 3D printing pioneer Morris Technologies in 2012:

“They [Mohammad Ehteshami, head of the GE Additive group, along with others from GE and Morris] moved a few machines to a drab building away from the main campus across Interstate 75 and started experimenting in secret with printing pieces of an old commercial helicopter engine. ‘We took six engineers and told them go and see what portion of the total engine they can print,’ Ehteshami says. ‘We hid them from our financial management, because we didn’t want them to cut our budget.’ The clandestine effort paid off. Within 18 months, the team was able to print half of the machine, reducing 900 separate components to just 16, including one segment that previously had 300 different parts. The printed parts were also 40 percent lighter and 60 percent cheaper. ‘To make these parts the ordinary way, you typically need 10 to 15 suppliers, you have tolerances, you have nuts, bolts, welds and braces,’ Ehteshami says. ‘All of that went away.’”[7]

While GE Aviation’s experiment is a classic example of how manufacturers can take full advantage of the possibilities afforded by additive manufacturing, most of the substantial growth seen in additive manufacturing technologies over the past few decades has been driven by processes rather than by the evolution of engineering design.[8]