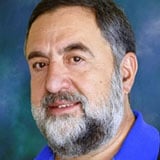 He has been professor of structural engineering at the University of Colorado. Several times he received the Professor of the Year Award. He has received the R&D 100 award and several patents. He received his Ph.D. in engineering science and mechanics from Georgia Institute of Technology. Finally, he is regularly invited as a keynote speaker and panelist on a variety of subjects (generative design, innovation, DfAM, IoT) in international conferences.