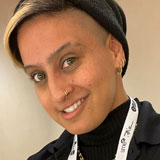 Humna Khan is CEO/Co-Founder of ASTRO Mechanical Testing Laboratory in Los Angeles, California. ASTRO specializes in the mechanical testing of additive material. Customers include new space companies, major OEMs and government space & defense agencies. Humna has been working for the space industry for over 15 years, serving payload development, rocket engineering and launch activities. She began her career at NASA, then SpaceX, moved to the U.S Air Force Space & Missile Command and then finally to a start-up that "3D prints" flight hardware for industry OEMs. Humna also served as the youngest Associate Professor of Engineering and Technology at California State University, Los Angeles. Humna holds multiple Baccalaureate and Masters of Science degrees in Computer Science, Business Administration, Information Systems Engineering, Mechanical Engineering and Quality Assurance for Aerospace. She also holds post-graduate certificates in Project Management and Six Sigma. Throughout her education, Humna specialized in robotics and space systems, piloting an exciting life of a “Rocket Scientist”. Humna has focused on space exploration her entire career – from being on the launch pad to laboring through Martian timezones, you can hear her stories in her TED Talk: “Rocket Science. Story of my Life”. On her free time, she supported NASA CubeQuest Team Miles in building a 14kg 6U spacecraft capable of achieving lunar orbit then breaking away for deep space operation. Her team is a NASA CubeQuest Challenge winner and their satellite will be payload on the inaugural Space Launch System (SLS) Artemis I mission. Humna’s dream is to take part in the inception of colonizing Mars. Her direction at ASTRO is aimed at qualifying spaceflight hardware that will aid such efforts. The team's goal is to be the industry's premier testing laboratory for the design, development and advancement of flight technologies.

Humna Khan is also the COO of Mino Technik.

Design Workflow for Additive Manufacturing: Lessons Learned from the Trenches