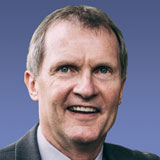 Terry Wohlers is principal consultant and president of Wohlers Associates, Inc., an independent consulting firm he founded 34 years ago. Through Wohlers Associates, he has provided consulting assistance to more than 275 organizations in 27 countries, as well as to 180+ companies in the investment community. He has authored 435 books, articles, and technical papers and has given 165 keynote presentations on six continents. Wohlers served as a featured speaker in events held at the White House in 2012 and 2014. He has appeared on many television and radio news programs, including Bloomberg TV, CNBC, CNN, Fox Business, MSNBC, NPR, and Australia’s Sky News.

Wohlers is a principal author of the Wohlers Report, the undisputed industry-leading report on additive manufacturing and 3D printing worldwide for 26 consecutive years. Many have referred to it as the “bible” of 3D printing. In 2016, Wohlers became an adjunct professor at RMIT University in Melbourne, Australia. In 2005, he was elected to the SME College of Fellows, a distinction granted to less than 1% of the society’s membership. In 2004, Wohlers received an Honorary Doctoral Degree of Mechanical Engineering from Central University of Technology in Bloemfontein, South Africa.